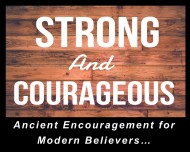 Personal story of family friends who have passed down the trade of fine carpentry to the third generation.

Joshua not only had a commitment to “finish strong” (as we saw previously), he also wanted to pass the faith along to the next generation.

II. We are to be Faithful Children

A. Fear the Lord – (healthy respect and honor)

B. Serve Him in sincerity – (genuineness)

III. We are to Give Public Witness to Both

Question: “Is your life a public witness?” “How are you passing it on?”

Time is an interesting part of life. It can be a welcome friend or a challenging enemy. I was thinking about time regarding my neighbor and the old Ford Mustang he’s working on. Among other things, the car represents changes in engineering and cultural attitudes since the 1960s. Time has a way of framing decisions in new ways that are removed from another timeframe, which may loosen the previous commitments.

So how do we finish strong over time? Let’s look at Joshua’s approach:

I. Acting on the Truth of the Word

A. Don’t veer to the left

B. Don’t veer to the right

(diligently and objectively searching the scriptures can surprise us both ways)

II. Remembering the Giver of the Word

(holding fast to the Lord v.8)

A. Acknowledging His sovereignty – (He has the right to define right and wrong)

III. Stay Focused on the Relationship

A. Outward love – (like wearing a wedding a ring)

III. Upholding the Standards of the Lord

A. When it becomes old-fashioned (remember Romans 12:1-2)

Question: “Do you want to finish strong?” “How are you going about it?”

“Standing on the Promises”

Last week, we looked at “Facing the Giants”, and this week we move into considering the promises of God. Unfortunately, we live in a culture of broken promises which can subconsciously influence the way that we think of God and His promises. However, God is unchanging, and His Word is unchanging. There is a pause in the Joshua narrative that comments on it:

I. Embracing His Promises

B. We must realize the purpose of His promises are His own (v.11) (God-centered not me-centered)

B. There must be an appreciation of His promises (Joshua 1:8)

B. There is confidence in the dwelling (Matthew 24:35)

Question: “Are you standing on His promises?”

In the 1770s, the British Empire was a “super power”. They had troops and navy posted all over the world. Colonies and trade were a central part of the crown’s growing wealth. With all kinds of systems and people to control, the business of empire management would have been a busy affair. Then one day, in the middle of it all, a letter arrives. It begins like this:

The unanimous Declaration of the thirteen United States of America, when in the course of human events…

In other words, they were ready to take on the giant…

Today, I want to talk about “Facing the Giants”

I. Caleb was Bold but not Arrogant

B. He stated the facts (often, all it takes to get people upset with you is to state the facts)

C. He voiced his request (fear did not prevent him from expressing his desire)

II. Caleb was confidant but not foolish

A. He made a realistic assessment of the enemy

B. He understood the odds (fortified cities at 3,050 ft elevation, tactical disadvantage)

C. His hope was in the Lord (we’re marching and trusting)

III. Caleb was successful but not selfish

A. He directed glory to an apprentice

B. He gave away land and resources

Question: “What giants are you facing?”

Last week we finished up with Ephesians chapter 6 and the importance of keeping our guard up. Spiritual warfare is often “unconventional” and involves surprises.

A. There was a mutual interest to be against God’s people (not unlike today where the world system is instinctively arrayed against the people of God)

B. There was a change of attitude toward Gibeon after they made peace with God’s people

A. Do not fear (even though they had already seen much)

B. “I have delivered” (past tense again)

A. Joshua had living faith (James 2)

B. The road was uphill and 20 miles (significant)

C. No break before the battle (often no rest before the spiritual battle)

A. The Lord empowered them

B. The Lord used an unconventional weapon

C. The Lord paused the laws of physics (that He set)

We are called to “unconventional warfare”. Are you ready?

Intro: “Keeping up Your Guard”

“Diligence is a hard discipline to maintain, rarely celebrated, but incredibly effective.”

Today, I want to look at “Keeping up Your Guard”

A. Our enemy deceives with appearance (like the set of a movie scene)

B. Our enemy deceives with words

A. Gathered the evidence (took provisions)

B. Made their decision (talked among themselves)

A. Came to terms with their mistake (didn’t cast blame or dishonor their vow)

B. Chose to honor the covenant (they gave their word ultimately to God)

C. Made a decision that was spiritually beneficial (in the future they would known as the “Nithinim”, ‘”given ones”, and would serve faithfully in the Tabernacle/Temple)

Question – “In what area do you need to strengthen your guard?”

Today, I want to look at “trying again” and how to be encouraged

I. Be Encouraged by God’s Reassurance (v.1a)

A. Do not be afraid (don’t look at the enemy, look to the Lord)

B. Do not be dismayed (discouraged, “un-courageous)

A. I have given (emphasis on Him and what he has done/will do)

A. God is infinitely creative and resourceful (walls fell once)

B. The enemy is generally overconfident because of pride

C. The enemy’s end is defeat

IV. Be Encouraged by God’s Word

A. Renewal of the Covenant (two-way street)

B. Remembering the blessings AND the curses (v.34)

Question: “In what area do you need to try again?”

Intro: “Following Instructions” – (personal story of someone not following instructions)

I. We Can Reject the Lord’s Instructions (v.1)

A. Instructions were clearly communicated and known

B. Achan was clearly seen by the Lord (identified and singled out)

III. There is Authority in the Lord’s Instructions (v.10-15)

D. Ask for clarification (come before the Lord)

IV. There are Consequences to the Lord’s Instructions

Question: “How do you view the Lord’s instructions?”

A. Statement in verse 2 is past tense – (In God’s plan, it’s already happened)

B. Jesus made a similar statement (John 16:33) – (He had already conquered the world, but had not yet physically gone to the Cross, but it was a “done deal”)

A. The daily walks may have seemed pointless

B. Our daily walk may seem pointless

Answer – It means “Stick to the Word”.

C. We must finish well – (which is sometimes the hardest part!)

“Christian victory isn’t a feeling, it’s a Biblical principle to walk in.”

Intro: “Preparation for Victory” – Story of the race for “World’s Tallest Building” in New York City during the 1930s and Van Alen’s strategy of a hidden spire (which was revealed at the last moment to win the title with the Chrysler Building.)

A. Miracle of the crossing – (there was momentum afterwards)

C. The natural choice would to attack – (Strike while the iron is hot!)

A. It was God that delivered them from Egypt

B. They needed to renew the Covenant

C. They needed to qualify for Passover – (doing things right)

A. Realization of God’s promise

B. Evidence can be overlooked – (like when their ancestors were comfortably eating manna and quail but deciding against trusting God earlier)

Personal story: “Spiritual mediocrity promises an oasis of rest, but is only a mirage in the spiritual desert.”

B. Moses, Joshua, and Caleb

B. Some settled for less

A. It’s often unknown (unknown to us, but not Him!)

A. He made it happen

B. He is to get the glory

C. We are to rely on Him

Question – “Do you possess the gift?”

Intro: In a recent GQ magazine editorial, the Bible was listed as one of the most overrated books in history and in their opinion one not to bother to read.

So, why read the Bible?

Simply put, it’s the history of the world and the revelation of a scarlet thread of redemption woven all the way through.

Many recorded stories include it and “Rahab of Jericho” is one of them.

A. Her Previous Life

B. Her Acknowledgement of Jehovah (9-11)

B. The Call to Action

B. Her lineage – Married Salmon which produced Boaz-Obed-Jesse-David, and ultimately Jesus

Question – “What does the scarlet thread mean to you?”

Intro: Last week we considered “God’s charge to the Hebrews, Joshua, and us”. There were two main points, and that was the remembering, and the directives received.

Thinking about that, it reminds me of a manufactured product known by the brand name “Kevlar” which consists of tough fibers woven with resin into an incredibly strong composite. It’s amazingly strong, and durable.

Over the course of Joshua’s life, there was a weaving together of a strong constitution. It’s very much like the weaving of the composite with tough fibers and resin. His upbringing, the miraculous delivery from Egypt, his experience with Moses on Mt. Sinai, and the wilderness years all served to strengthen his faith. When God instructs him to meditate on the words written down by Moses (v.8), it was a directive to stay focused every day and respond with a “Word-Strong” attitude.

Today I want to look at what a “Word-strong” attitude looks like:

Based on the foundation of a growing relationship with the Lord, we are to meditate on these things and let the Word strengthen us “layer upon layer” (like the weaving of a strong composite).

Consider the points of the Philippians passage:

Intro: The significance of the “Roman Arch” in history

In scripture, there’s something I call the “Arch of Strength”. On the one side is ‘remembrance” and on the other is the directives that God gives us based on (and tied to)

I. God’s Charge to the Hebrews

C. In the meditating on/communicating the Word, there is

III. God’s Charge to Us

B. God’s Directive (the picture of Joshua)

Intro: Snoopy and Lucy (the example of her as a discouraging presence)

Life can be very discouraging at times…

Joshua is a transitional figure in the history of Israel

I. God is our Banner

A. There will always be “Amalekites”

B. God is our standard to look at (Moses and the rod)

II. God is our Rock

A. Joshua grew confident in the Lord

Question: What has your name come to represent?

III. God is our Provider

Joshua was no naïve, idealistic youngster. He made the comments from a confidence in the Lord. He trusted God for:

How does your life reflect that?