The Professor’s Dead and I’m Bummed about It 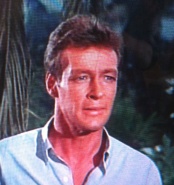 Russell Johnson aka “The Professor” from Gilligan’s Island is dead…and I’m a little bummed about it. Not because I’m a huge fan, but because of what his passing represents. When I was growing up, Gilligan was a daily presence on “after-school” TV and more than once I got sidetracked (from homework) watching the Professor build cool contraptions from elements “indigenous to the island” as he would say.

Reading his story reminded me of something you may not know. Before he was ‘The Professor”, Mr. Johnson was a World War II bomber crewman, decorated Lieutenant, and was shot down over the Pacific. In his day, it was not uncommon for actors to be veterans…not exactly the case now. Some of my favorite actors over the years were WWII veterans like Jimmy Stewart, and they reminded me of the older men I loved to hear tell stories when I was a kid. Their legacy is one of courage, commitment, hard work, decency, and patriotism.

Dawn Wells aka “Mary Anne” (and yes, better looking than Ginger, in case anyone is still debating it) tweeted that he was “a true gentleman, a good father and a great friend”. The “Greatest Generation” is quickly passing and I hope we do them justice by carrying on the best parts of their legacy. Thanks Professor for your service and the can-do spirit your on-screen persona gave to every boy trying to build “cool stuff” out of junk…you’ll be missed!

...Christ-follower, husband, dad, minister, and chronic day-dreamer
View all posts by cchrisholland →
This entry was posted in Uncategorized and tagged Gilligan's Island, Russell Johnson, The Professor. Bookmark the permalink.